Don’t be fooled — he’s really a boiling cauldron of rage.

How do I know this? I found out the other day, when Sophie, in a fit of anger, informed me (in a very calm voice, mind you) that “Chippie is going to slap you in the face.”

I used to let Chippie sleep in Sophie’s bed. Now he cools his murderous little chipmunk heels in the toybox, underneath all the heavy toys. Serves him right. 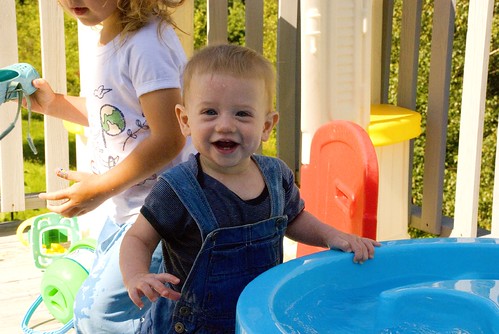 Our boy is now more than nine months old. Where does the time go?

Because so many people have asked me in the weeks since I wrote about Owen as an infant, I will say here, for the record, that I no longer believe my son is trying to kill me. Since making his debut as a cranky, occasionally implacable baby, Owen has become the happiest little guy I’ve ever known. Of course, he has his fussy moments — especially now that he’s growing a mouthful of teeth — but even when he’s crying, it’s easy to make him laugh.

He’s also impossible. Where his sister was a very quiet, thoughtful baby, content to sit and absorb her surroundings in relative silence, Owen is a writhing, babbling whirlwind of activity. A snuggler he ain’t — as soon as you pick him up, he’s trying to make a ladder out of your ribcage (or, if you’re Leah, he’s trying to use your shoulder as a teething ring). He can’t sit still — turn your back on him for a minute, and he’s found his way into a drawer or cabinet, or better yet, pulled the kitchen garbage can down on his head.

(The garbage can in our kitchen has a totally awesome motion-activated automatic lid. Sophie has named it Roga. I’m assuming it’s short for Robot Garbage.)

Anyway, here are some basic facts about our son:

As you can see, he’s quite a lot of fun, and it’s only getting better, especially since we’ve agreed that two children is plenty. Now I can look forward to being able to sleep again…in ten years.

Next: Sophie goes to preschool!