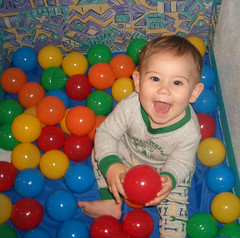 Sophie has slept through the night for the first time!

And she was in her crib! I feel like leaping for joy on a hilltop in the wind.

We always said that things would be different once we got settled in our new home. I have to admit that I feared we were all talk. (I have a bit of wussiness in me.) You may know that Sophie was sleeping in our bed for the last 5 months. This wasn’t something that we planned. Our trip to RI in February somehow broke her sleeping mechanism and in order to stay sane, we just put her in our bed and I nursed her to sleep. Well, I had to nurse her to sleep almost every hour. Yes, I love her plump little arms wrapped up in me. Yes, I love being cuddled up with her. No, I can’t sleep with her crammed into my bossom each night. Sophie and I were just not sleeping. (I just learned that Jeff was sleeping fine. His motivation for needing her in a crib was to get our “marital bed” back.)

Even worse than the sleep deprivation was the constant fear of her falling out of the bed. Naps were especially nerve wracking as we’d have to barricade her in with pillows. I’d also have to lay down next to her until she fell asleep, which sometimes took 30 minutes or more. As you probably have gathered, I had absolutely no time away from our sweet little love. It was wearing on me.

So, I gathered all my patience and inner strength and attempted to change things. I had the help of the Sleep Lady. And it really worked! If I ever see the Sleep Lady I will hug her with all my might and kiss her on both cheeks. I learned to teach Sophie how to settle herself and get the sleep she (and we) so deparately needed. We’ve been doing it for about three weeks, but we saw results after the first three nights. Saying that those first three nights were “rough” would be an understatement. She cried and cried and resisted like crazy. I sat by her crib for all of it, sobbing and writing in a journal to convince myself not to give up. I am so proud to say that I didn’t give up. She’s slept in her crib ever since we began. We are all much happier.

Now, Let’s talk about our little beauty. SHE IS SO ADORABLE! First of all, she is plump. Also, she is sweet and funny. If she sees my belly, she blows on it and looks at me with a huge smile. She gives love on command and she cracks up when we dance. The letter B is her favorite. She tries to say words like bye, ball, and book. We’re convinced that she knows what they mean. She’s getting more playful and curious by the second. I want to show her off to everyone that we meet.

I feel so lucky that I have been able to have these past 3 months home with her. Even though two of them were filled with packing, moving, unpacking, and other nomad-like behaviors we were all together. There was plenty of time for kisses and attacking. She’s our girl.