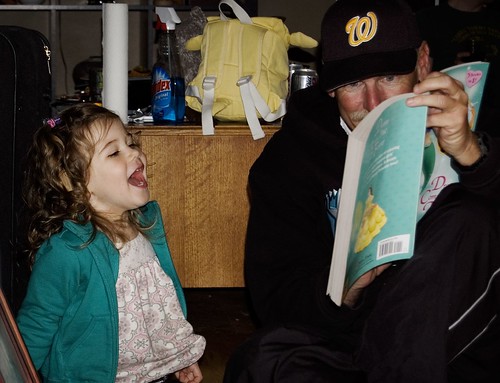 No, it was not supposed to be over a month before I wrote in here again. What can I say? The mind is willing, but the flesh is weak. Or maybe it’s the other way around. All I know is, after I spend the daylight hours writing about movie stars and new music, I find that the synapses in my brain aren’t good for much besides watching TV.

Also, I recently took a trip across the country with Sophie. That picture up there? That’s her, reading a story (it’s actually a coloring book, but whatever) with her Grandpa Jim. My little girl and I flew to California to help my sister celebrate her graduation from college, and it was absolutely wonderful — especially the part where I got to spend a weekend with my family, including the unexpected addition of my brother Rich and his fiancee Veronica.

Absolutely wonderful. But. Flying with kids will take a lot out of you, and by “a lot,” I mean “what feels like five years of your expected lifespan.” Our friends Rahul and Sarah are very nonchalant about taking their daughter Tatiana to all sorts of exotic destinations whenever the mood suits them, and Rahul is forever expressing surprise at my reluctance to travel with Sophie and/or Owen. This is just one reason why I hate Rahul.

Sophie, it turns out, dislikes planes. She’s a lot like me in this respect, with the subtle difference that I don’t freeze in place and start screaming bloody murder as soon as I step into the aisle, ignoring my sweating, red-faced father, who is standing behind me, holding my carseat and buckling under the weight of two duffel bags slung over his shoulders like a pack mule, pleading with me desperately to just move already.

(Also, I have never peed in my seat on a plane, but based on some things I’ve recently read, I’m relatively certain that my daughter has plenty of grown-up company in the whole “unplanned relieving of one’s self while flying” department.)

Anyway, in case you were wondering, it is possible to survive three hours in O’Hare with an unhappy little girl, two bags, and a carseat. It is also possible to remove 99% of the vomit that comes spewing out of said girl and into your mother’s car with less than one box of wipes. Finally, provided you have a portable DVD player and some well-timed nachos, it is also possible to get that girl through a college graduation ceremony.

What you may not survive, however, is the week it takes to rid the girl of the supervirus she picks up somewhere between California and your home. Whoooooooooooo. She’s back to normal now, but let me tell you, Sophie does not like to be sick, and she will do everything in your power to make you understand how deeply displeased she is.

Really, though, Sophie did a tremendous job on the trip. Sitting on an airplane for six hours is difficult for me; I can’t imagine how crappy it must have been for her. And then with the disruption in her routine, and the barfing, and all the moving around — well, she was a real trooper.

And what about our boy? 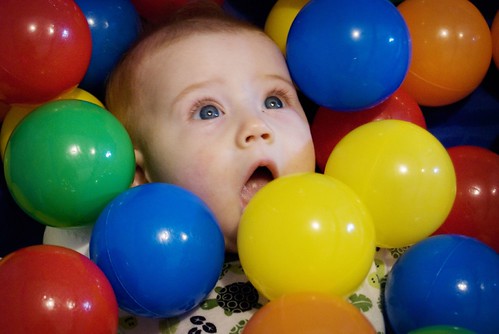 This little guy has a terrific personality. He’s always laughing and smiling and babbling happily. There are a lot of times when Sophie, in the midst of some terrible-twos tantrum, will cross into Owen’s line of sight and his face will light up. He just loves people, and he’s particularly fascinated with his sister. She, of course, wants little to do with him. I keep telling him it’ll stay this way for probably the next 16 years, but I don’t think he understands me yet.

In terms of developmental milestones for Owen, I don’t think there’s anything to report here, other than that he’s branching out into non-breast-derived foodstuffs for the first time, and they have affected his diaper output accordingly. No crawling for him yet. I’m pretty sure that when he does turn mobile on us, no one will hear from me for quite awhile.