My son becomes a man:

What happens when you leave a can of (supposedly) empty unsweetened baking cocoa within the reach of a certain 14-month-old? This: 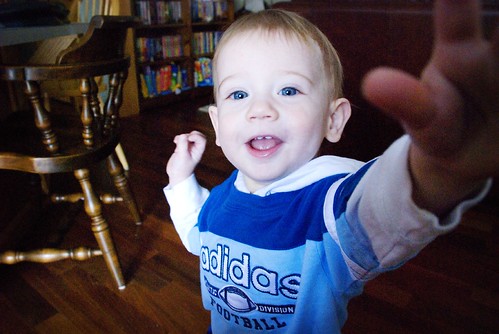 Our little Owen (a.k.a Odie, a.k.a Ode) is now one. He actually had his birthday November 21, but he’s sort of a handful, and this is the first time I’ve felt sane enough to sit down and pause for a few moments of child-related reflection.

He’s tons of fun — so little and happy. I could do without the way he likes to yell at us when he wants something, and the way he loves to throw chewed food off his highchair, but all things considered, he’s a numberswiki.com

Also, he already knows how to say “remote” and “poop.” These are two of the most important words in the male vocabulary, so I feel like I’m pretty far ahead of the game as far as my paternal duties go.

We have a video of his first year, made by Leah, and it’s awesome…but it’s also 15 minutes long, which I’m pretty sure is well over the limit for YouTube. Maybe we’ll split it up into chunks at some point. More likely we’ll just start making smaller ones.

Actually, it’s probably most likely that we’ll just say we’ll make smaller ones, but our intentions are pure.